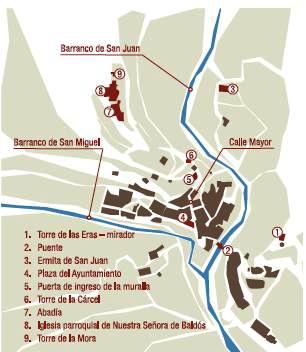 ana is a small town belonging to the municipality of Puente de Montañana, which was declared Historical-Artistic Heritage and Asset of Cultural Interest.

Its cobbled streets, arches, bridge, capitals, doorways and apses of its churches offer visitors one of the best exponents of Aragonese art and life in the Middle Ages.

The town of Montañana, on the bank of the Noguera Ribagorzana River, is declared a Medieval Historic-Artistic Site, for its magnificent monuments, including three Romanesque churches, the remains of two castles and a Roman bridge that welcomes this monumental medieval nucleus. From there you reach the hermitage of San Juan, from the thirteenth century. If you continue straight ahead you reach the Plaza del Ayuntamiento, where several capitals of the disappeared hermitage of San Miguel were reused.

As we ascend the Main Street we discover remains of its fortified enclosure: the prison tower, wall canvases, or the entrance arch to the upper enclosure. Already inside, behind the remains of the abbey, you reach the church of Our Lady of Baldós. It is an extraordinary Romanesque temple that houses a splendid Christ Pantocrator in the tympanum.

At present, this town is immersed in a project of rehabilitation and consolidation of the constructions of its urban nucleus so that it returns to be the medieval enclave that has never ceased to be.

Route of the Witches

Route of the Dinosaurs

Walk around the reservoir Eriste