Of the structures we can distinguish only monastery church. Its plan is a basilica with three naves, profoundly transformed in 1613, according to the inscription on the front door. He was also redecorated in 1913. After the amendments is the current configuration as above, with the change of orientation of the head, now to the west.

The three buildings are arranged asymmetrically in plan and have different extensions to each other. In general terms it shows a greater width of the nave. Each ship has four sections. The current head is the old wall of the feet close to the west, completely straight and no element of articulation.

The nave and south aisle are covered with a barrel vault completely semicircular profile. The central nave of the key accused deformation due to the central third of it has been rebuilt brick by the collapse of the fall of the original vault. The north aisle has notable differences from the others. It is covered in three sections to the west with groin vault that start staggered pillars attached to the north wall and arches from the limited thickness but articulate the wall with high plasticity. This ship is extended in height in the seventeenth construction of a choir loft or forum on the old central apse, supported by a groin vault, which is accessed from inside the north and the apse which completely changed the supporting structure area to support the new platform. Also in the front of the choir is a painted inscription: "TO BE RESTORED THE YEAR 1913 AND PASTOR JOSE RIBERA AMDG ADEMA"

The current access has a semicircular arch with fluted pilasters and capitals, fascia supporting a triangular pediment with balls in the corners. In the center of the tympanum, in a cartouche, carved bears the date 1613. The portico that precedes it has a barrel vault and domed tops. On his forehead bears inscription on the arch interior, lowered, "IS THIS THE REVEREND SEPVLTVRA PRIOR TO SPANISH GASPAR Frai FVE MVRIO THE HOUSE THIS AD 1613". 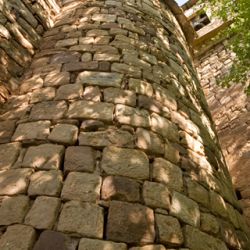