La Torre de los Moros or Moors des Castell is one of the most important icons in the historical tradition of the town of Lascuarre. When the town was a small defensive core in the early second millennium, it is believed that the tower was a strategic lookout point, vital for the survival and security of its people. Given the distance of about two miles over the river Lascuarre Isábena, the strategic location of the tower is not casual. The motivation for this location are obvious when oteamos the horizon from its upper walkway. We can see clearly Isábena Valley from Güell, Monte de Roda and Roda de Isábena (northeast) to its final journey from Laguarres to Graus. Therefore include the extent of visual field that dominates, which allowed monitoring the entry of people or enemies from the Valley or the Sierra Isábena Laguarres the valley that juts into Lascuarre, and Luzás Castigaleu.

However, there are experts dating the Tower of the Moros as a home built in the seventeenth century certain details given on the doors and windows carved in stone quadrangular building. Could also be rebuilt after being used as a lookout Muslim.

Popular culture has always associated with the "Moors" past history of the tower and not far from her artificial holes are observed in the rock are known as laundry or llavadero des Maures. 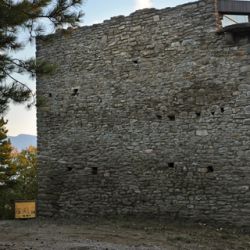 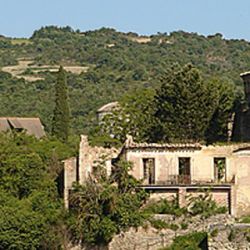 The Castle is well worth an episode Lascuarre apart due to its importance in the historical back in the reconquest of the Ribagorza and the subsequent formation of the union with the then small county of Aragon (Jaca).

It was conquered by the King of Pamplona, Sancho III the Great (1004-1035), delivered him to the monastery of San Sadurní of tabernole (1023), owned it in fee Arnau Mir de Tost, Isarn and Count Guillem Arnau Mir de Pallars Jussà . The castle was head of three castles that were once controlled Lascuarre reconquered from the Muslims: Laguarres, and Juseu Luzás.

Its initial construction is believed to be Arabic but several changes were given the continuing attacks received by both parties. Today we can see the remains of a complex of walls that formed the original castle around the parish church of the Assumption. They are next to what was the monastic abbey although it is not excluded that part of the castle derruyese in building the church in the sixteenth century.