It is a building whose greatest interest is in been a sample, though timid, of the hybridization of Lombard persistence and the jaquesas developments produced in the valley of Benasque in the twelfth century). It is built from ashlar arranged in regular rows, except for some parts added later (as the sacristy). It presents a simple plan of a nave, chancel highly developed and east-facing semicircular.

Access is by the south side, through a round arch door. Above it is a Trinitarian Crismon, which according to Garcia Guatas is a contemporary door. From the base rises a belfry with two semi-circular arches.

The baptismal font, hemispherical, has embossed decoration pads and hand holding it at the bottom, as usual in the churches of the valley (XVII century).

In old photographs preserved in the sacristy of the church can be seen two missing elements. On the one hand the little porch protecting the cover, with lintels and monopitch roof (popular construction probably later than the door itself).

On the other hand, the high choir that was at the foot, which highlighted the wooden balustrade, with an interesting work and filigree openwork tracery of Gothic tradition, probably datable to the sixteenth century. 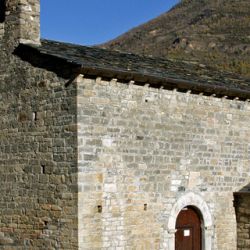