The buddhist temple of Vajrayana Dag shang Kagyu is a spiritual refuge located in the small town of Panillo, approximately 10 kilometers from Graus, which has become some sort of Tibetan-like sanctuary.

Dag Shangkagyu is a religious community linked to the Dagpo and Shangpa Kagyu lineages of Vajrayana buddhism.

Founded in 1984 by SE Kalu Rinpoche and established in 1985 as a center dedicated to the practice and study of Buddhism,having also the aspiration of becoming a future spiritual retreat for its students.

The sanctuary is led by the spiritual authority, the venerable Lama Drubgyu Tenpa and its home to approximately 8 Lamas from western descent,Tibetan-Buthanese,as well as several other residents and volunteers from Spain and around the world.

The temple was built in the traditional style with a 17m tower temple called Estupa,representing the "opening gates" to the higher teachings and a Shedra ( school) .The temple also has a school and a lodging area that serves as a retreat spot.

Samten Ling has its own "tower temple (estupa)" dedicated to the Buddha's enlightenment,where several small houses serve as accomodations for individual retreat, and a special area assigned for long term retreat. These are divided into Naro Ling for men, and Nigu Ling for women.

Life in the community of Panillo is austere and simple,along the year many activities are carried out, such as conferences social meetings,courses,etc. making it a perfect place for meditation practice and spiritual quietness contemplating a breathtaking view of the pyrenean landscape. 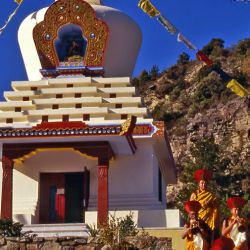 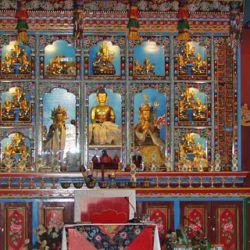 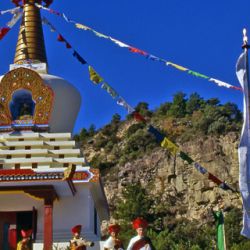