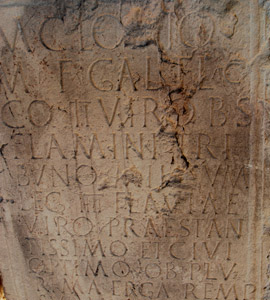 Labitolosa is a Roman city located in Cerro Calvario, in the town of La Puebla de Castro, dominating the valley of the River Esera.

His working life took place between the first century BC and the late second century AD, when the was abandoned.

Until the beginning of the excavations only a Latin inscription discovered in the sixteenth century and included in the CIL gave notice of its existence by referring to a cives Labitolosani (labitolosanos citizens).

Since 1991, the Roman city is regularly excavated by a joint team of researchers from the Universities of Bordeaux (France) and Zaragoza (Spain).

The main monuments are excavated, the Genius of the Municipality building, two spa buildings dating from the second half of the first century AD and between the late first century AD or early second respectively, and a Roman domus, or house. Today the baths and the Curia are permanently protected and open for public visit, while other areas of the city continue in the process of excavation and consolidation.

As a special note is the good condition of the curia (meeting place of the ordo of decurions or notables of the city), where several inscriptions have been located on its original site and pedestals for sculptures. It also highlights the condition of the heating of the baths, which have become a vestige of Roman baths complex and best preserved of all the Pyrenean area. 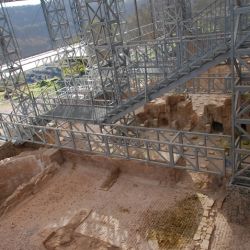