This religious complex - military, now in ruins, was part of the Christian outpost against Muslim places of Graus, Barbastro and Monzon, being built around the year 1055-1060 by local stonemasons imitating the Lombard masters.

In the southwest corner of the enclosure is a circular tower. At the base of the wall attached to the tower is a series of openings through which boiling liquids or flammable poured against the enemy. On this wall, which is still good height, three remain rectangular cubes.
On a somewhat lower castle is the church. At the top, near the north tower of the castle remains the cistern.

Pano's Castle is located in the town of the same name, in the town of Graus. To reach it you have to leave the north Graus. A few kilometers there is a well marked detour that leads to the Valley of the Fueva. Shortly after passing the Panillo Buddhist monastery, and the highest point of the road, once it overlooks the village of Pano, left out a track in good condition, which leaves us near the castle after a short . 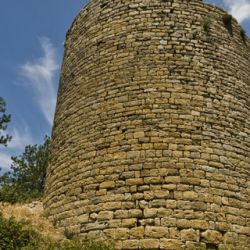